The idea came from watching ants and wondering if it possible to reproduce ants movements and hive mind with code. If statements; Algorithms; Goals; Strategies; and eventually Machine Learning ML. AntHive platform is made for you to test your codding skills, explore new strategies, benchmark algorithms and conducts science experiments with hive mind.

AnthHive.IO platform is free and the majority of it is open source. Ideas, suggestions and contributions are welcomed! GitHub page.

You never coded before but eager to try. It’s going to be a bit hard to get started, don’t let it stop you. The learning curve is steep, but results will yelled understanding of main tool in programming like if statement; loop; function; object. Levels progression will force you to optimize your code for performance. Most importantly this platform will teach you to think ahead and predict your program behavior - which is the most important skill for Software Engineer.

You know your way around 1s and 0s. Want to try a new codding language that you heard so much about it. Maybe you want to demonstrate how well you can optimize your code. Battles between codding languages become more vivid like. JS vs Golang vs PHP in one map with equal rules.
Have multiple versions of your bot battle against each other on one map will identify which strategy is superior. Or could be used and training ground for your ML/AI bot.

We love since and here to support it at no cost. Famous experiments like prisoner's dilemma or hawk–dove game motivates us to explore and learn from Hive Mind. If you want to propose an experiment contact us at science@anthive.io We can customize parameters and create any virtual environment that suits your needs.

Sim or Simulation is a game engine that responsible for controlling virtual environment. Sim runs in docker container and makes web request to your bot with JSON** payload. Expecting response with orders for each ant. Web request made over HTTP protocol as POST request on port :7070. Each request times out in 500 ms. Therefore, your bot has limited amount of time to calculate order for each ant. When Sim receive response from your bot it validates and applies orders according to Rules. Then Sim generates a new state of the map. That way the cycle (tick) continues until the limit of the game is reach. 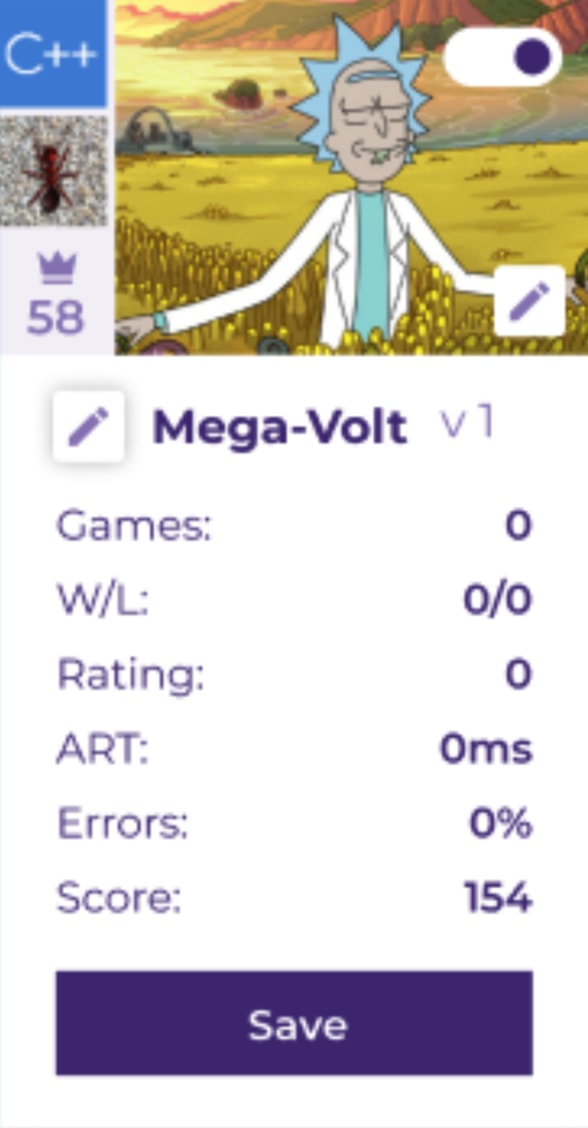 Bot is your code that runs in docker container on private network.

Your bot must listen for calls from Sim. When creating a bot you specify a coding language. If you want to switch or try another codding language, you should create a new bot. Bot can be created from git repository or from Sandbox

Calculate orders for each ant - is the main responsibility of your bot. You have full freedom to do it your way applying strategies; algorithm; or random action. Each bot have versions (commits). For each game you can choose which version of your bot will battle. Each version accumulate statistic from battles. Error percentage; Average response time; You can choose a name and avatar for your bot. When your bot is active it’s plays robin round with other bots to determining rank in leaderboard.

The JSON payload of each request to your bot contains information about current state of the map: width; height; and cells (array of cells). The map visually represented as two-dimensional Canvas. With coordinates x and y starts from 0 from the top left corner. In code, it’s a 2d array of cell objects with x and y are indexes of the array.

As an example the cell marked green on the image with coordinates x=2 and y=3 could be accessed by index canvas.cells[y][x] or canvas.cells[3][2]

Note in near future cell will also have property terrain of the tile like: water; stone; fog of war.
If you have suggestions or would like to be involved in game development, join our Discord.

Image on the left of JSON object: Ant is an object with six properties: id; event; age; health; cargo; point.

Order is a json object with three properties

The main goal of the game is to collect food on the map and bring it to the hive. When you collect 7 food in one cell of your hive it will be converted to a new ant for your colony. The size of your hive will grow as well to match the amount of ants. It will not shrink when your ant die. The game ends when a limit of ticks is reached or no hives left on the map. The Bot with the highest score is a winner.

Within a game your bot have parameters that represent it performance for each tick.

Question: What happens when ants from different bots try to move to the same cell during the same tick?
Answer: In this case, the bot that first passes to the simulation the order to move the ants into the cell will perform the movement, and the ants of the other bots will get an error with the deceleration parameter.

Question: Where is the code stored ?
Answer: The code is stored in Git repository. Supported by Github, Gitlab and Bitbucket.

Question: Where does the food appear ?
Answer: The food appears in quantity from 1 to 9 in random points of the map.